Why on earth does this blog exist?

Where did this silly blog idea come from?

You know how sometimes you feel like you just need to RELEASE THE KRAKEN when you come across difficult people who are hell-bent on ruining your day/week/life? This blog came about when its author DrPusSea returned from an expedition to Antarctica, on Christmas Day 2016, with a freshly-released Kraken in her bag.

She went on this largest-all-women-scientists expedition because she hoped to encounter the Kraken in its lair in Antarctica. She even said so on her application video:

But instead, she found something else…

…a Medusa, a dangerous Gorgon who she couldn’t get away from (being stuck on a ship in the icy depths of Antarctica, and all). Medusas were something that had haunted her repeatedly in her past. Fighting them was literally in her blood, which seems to have its fair share of blue (i.e. Kraken) in it already.

If you have seen the movie “Clash of the Titans” you will know that the head of the Medusa is the only thing that can kill a Kraken. Because of this imminent threat, DrPusSea physically manifested, and then released, THE KRAKEN on the ship, during her science talk [you can soon check out the whole story in the “Krak’n’tarctica II – Medusas” blog]. 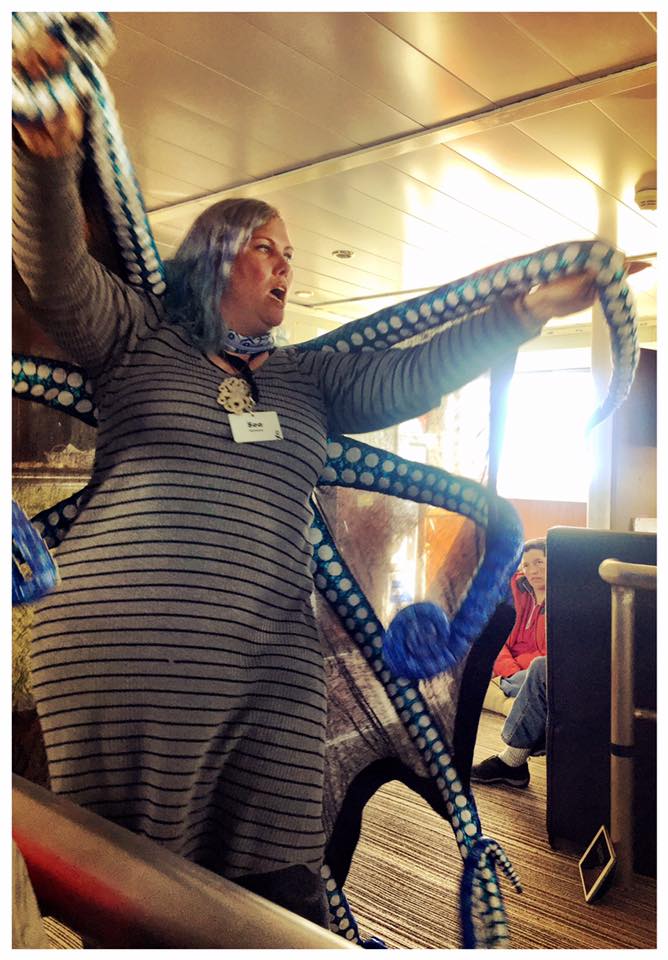 DrPusSea releases the Kraken in Antarctica

After that talk, the Kraken attached itself as her tentacled armour. It became a source of comfort and hilarity to her and the other women scientists on the ship. But not only did they now have a Kraken and a Medusa on board, the Kraken also accidentally (or so it claims!) summoned the rather evil Dread Lord Cthulhu after breakfast one morning! 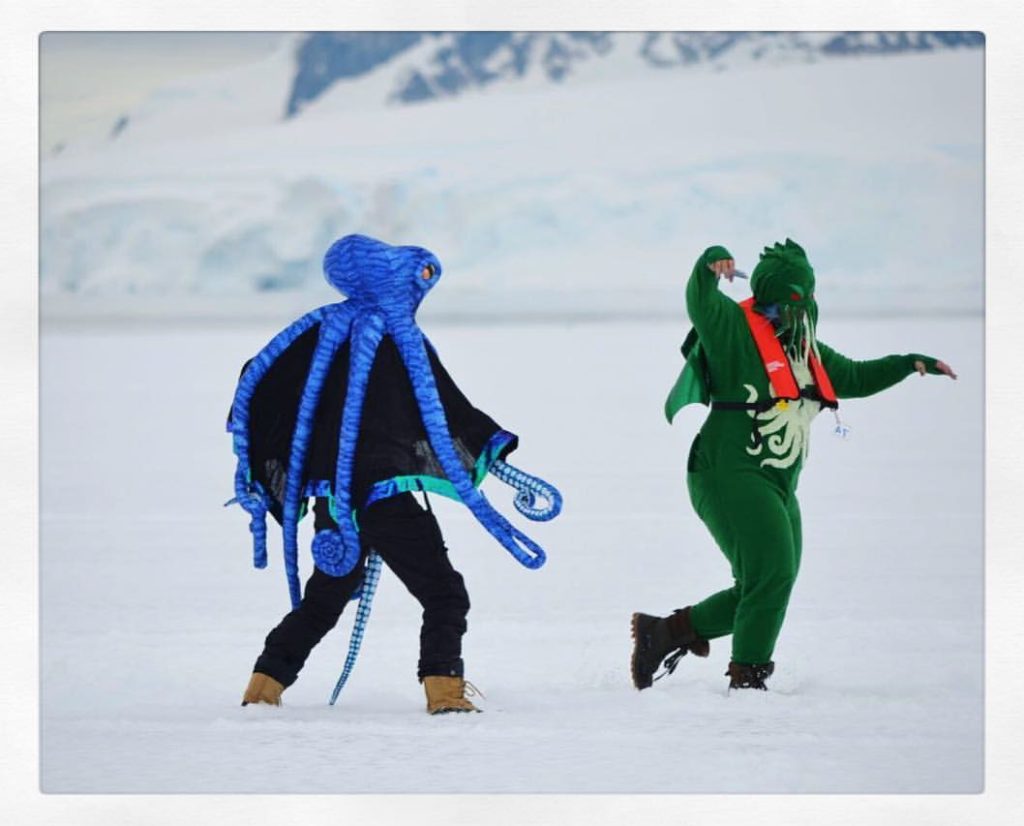 The women more or less successfully managed to contain the two of them on the ship without too much mayhem, until their safe return to Argentina. They definitely helped keep the Medusa in check! DrPusSea was incredibly sad to say goodbye to her new tentacled friends in the Beagle Channel. Or so she thought…

So, on her return from Antarctica, DrPusSea realised – with some trepidation! – that the Kraken and Dread Lord Cthulhu had hid in her suitcase. They claimed that they were now inextricably attached to her. (Probably because they really liked her lair with all the tentacles and tasty cat biscuits.)

Since then, they are lurking on Wellington’s beautiful South Coast [we’ll soon give you a look “inside the Kraken’s lair”]. This is where they discovered the “shiny magic box” (DrPusSea‘s iPhone) and its amazing Gorgon*-tracking [a * means there is a definition for that word if you hover over it] capabilities.

They still demand to be released at any inopportune occasion – basically, whenever they feel that some righteous smiting is in order. Which is often – and especially after Dread Lord Cthulhu reads any tweets by @realDonaldTrump. The Kraken still manages to regularly hide in DrPusSea‘s suitcase. One time, it ended up tending a bar in Los Angeles!

Another time, the force of nature that is Niagara Falls, released it! 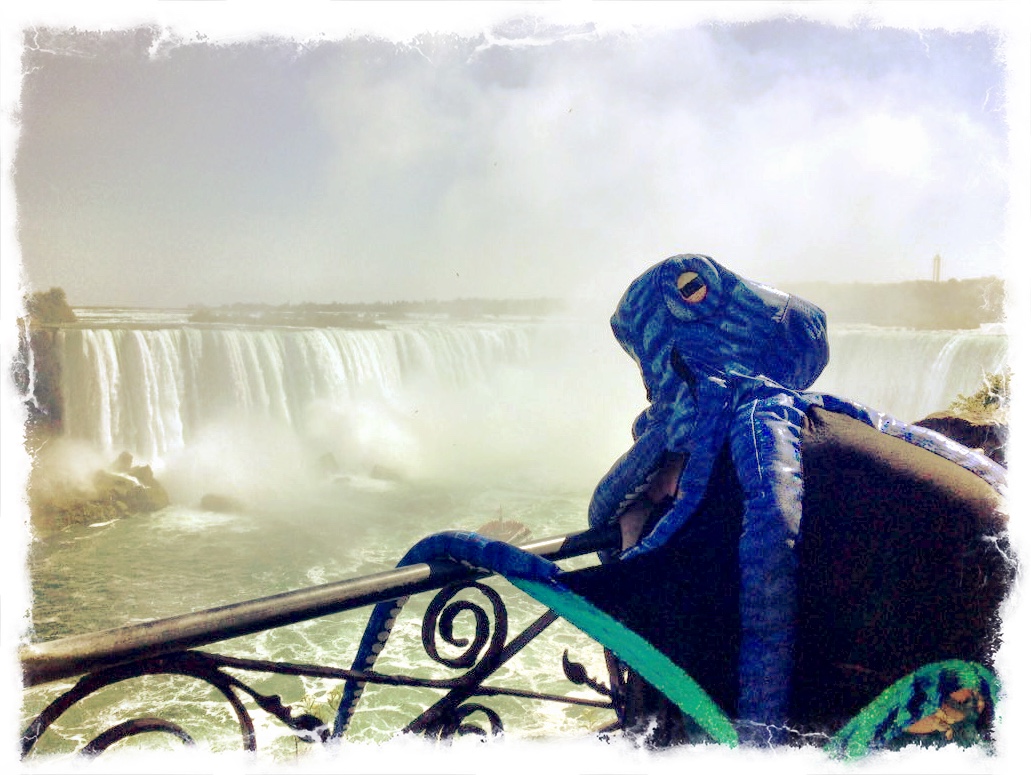 And just recently, on World Octopus Day, the Kraken blog was released by the Kraken from the seat of Kraken lords, the Icelandic Viking Parliament.

So, ever since then, in Wellington (largely)…

…the tentacled overlords muse, and they bask. And they occasionally stalk the chickens and cats (and, only rarely, the neighbourhood children).

This blog is meant to give the Kraken and Cthulhu a healthy outlet for their main purpose – SMITING HUMANITY FOR ITS ARROGANCE AND HUBRIS!

Hopefully, without physically ushering in the end times for the Universe.

It is also meant to provide you, its readers, some mirth. As well as some insights into the mighty power and long-lasting mythology of the Kraken. There is also a lot of great content about cephalopod science, because DrPusSea wants to show everyone how octopuses and their tentacular kin are clearly the coolest things in the Universe! And, every now and again, there will be blogs where you’ll learn how the Kraken can become a source for strength when facing adversity, or when you are under the onslaught of Gorgon narcissism and greed. Especially when they try and create more fascist kleptocracies.

And, who knows? Maybe we can combine our Human/Kraken power to smite these dreadful Gorgons and their sociopathic systems, once and for all?

Please leave comments on things that you like, things that bemuse you, and things you’d rather hear about. If you want to send in your own Kraken tales, art, poems, music, photos, or ideas for who the Kraken and Dread Lord Cthulhu should smite next, just shout.