Krak’n’tarctica I: Setting the scene

It starts at the ends of the earth – in the icy vastness of Antarctica, a continent full of Kraken lairs and myths. There dwells the most colossal of the Kraken family (the Colossal Squid Mesonychoteuthis hamiltoni, literally the ‘Middle Claw Squid’). New Zealand toothfishermen caught this fearsome beast. Now it rests in our national museum, Te Papa.

Antarctica, or rather, the Ocean of Inaccessibility, is also well known to be the location of Dread ‘Eldritch’ Lord Cthulhu’s lair. There it slumbers, until someone summons Cthulhu (which happens every now and then when some fool or another stumbles across a Necronomicon). Cthulhu usually sleeps in the “nightmare corpse city of R’lyeh“. Which is also a great description for a 1-Star Yelp review…

I was ecstatic to be part of the inaugural, largest, all-female (scientists) expedition to Antarctica. Antarctica was one of my top 3 bucket list items:

1st place: THE DEEP SEA – what other place for a Krakenologist than the abyssal depths to explore and to chase the Kraken? (Please call me, James Cameron!)

Antarctica, the continent, was all I could have possibly imagined. And so much more. Although, the only attributes I could think of repeating on my postcards to my family (yes, you can send postcards from the ‘Penguin Post Office’ in Port Lockroy – they even arrive after 2-3 months!) were ‘mind-blowing’ and ‘breathtaking’. In both German and English, my words failed me to adequately describe this unbelievable place. It really gets under your skin. And not just because it is freezing!

The Antarctic vistas, albeit always stark and usually white, seemed to change all the time. No day was the same. Its sights, smells and sounds were often over-powering, both in their presence (penguin poo!) and absence (like the quiet moments before a glacier birthed). CRAAAAAACK!

It is, quite literally, mind blowing how many forms, hues, shapes and sizes ice and water can take.

And the colours! Oh yes, the colours… It isn’t just very, very white. Antarctica is also very blue. And green. And some kind of intense blue-green that needs to be seen to be believed.

I cannot describe what it felt like to be surrounded by a massive chinstrap penguin colony (Pygoscelis antarcticus, literally “the rump-tailed one from Antarctica”) in an ancient volcanic caldera, on Deception Island. We were following the footsteps of another hero of mine, Sir David Attenborough, who I tried to imitate in the video below (let’s just say his day job is safe!).

What is really sad is that these penguins are disappearing fast because of climate change. You can even see it when you compare what we saw in 2016 to Sir David’s original footage of this colony in 1993). Some penguin colonies, notably the naughty Gentoo, are benefitting from climate change. But most, including the two true Antarctic penguins, the Adélie and the Emperor, are being pushed further and further south. The US Palmer research station we visited showed up to 80% declines in Adélie colonies.

The Antarctic continent is one of the last frontiers – for scientists, and especially for women. Women weren’t even allowed on most Antarctic expeditions until the 1960s. The climate and conditions were thought to be too harsh for us precious petals.

Ya really think women are too precious for Antarctica? Most of us did a ‘polar plunge’ at least once, including when we were sick as dogs.

So, sexism and sexual harassment found its way onto the farthest of the continents. Even though Māori women were apparently among the first Antarctic explorers, as early as 650 AD! And even though male explorers had already named large parts of the Antarctic continent after their lady loves, or queens. 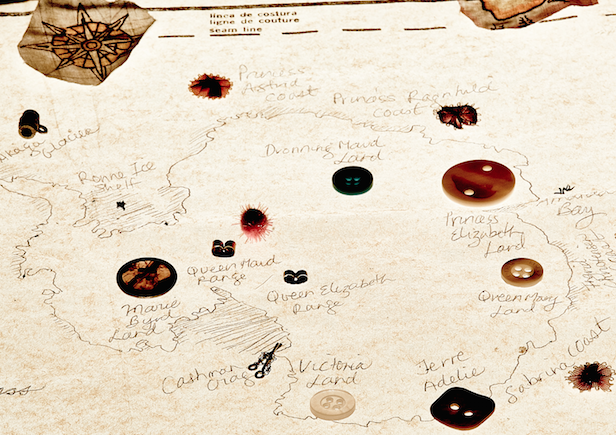 Mapping Antarctic women – thanks to the amazing Carol Devine

Being part of the largest all-women expedition to the continent, which promised to “combat sexism in science and climate change” (none of these promises were fulfilled, unfortunately) thus seemed like a dream come true. Antarctica, and the other women scientists, were one of the best things I have ever encountered. But, like with most things that seem too good to be true, there were pitfalls, dangers and drawbacks. Mine involved a particularly heinous enemy of the Kraken: A Medusa and her harem.

I shall recount this frightful tale, which caused the releasing of the Kraken, in another “Krak’n’tarctica” blog. This one – my memories of Antarctica and its wondrous sounds, sights and smells and our science sisterhood – is too good to mar with Gorgons.

3 comments for “Krak’n’tarctica I: Setting the scene”