This is the tale of Dread Lord Cthulhu, Soul-Eater and Eldritch God, and his fucked-up family tree

H.P. Lovecraft, Cthulhu’s personal deranged chronicler, made frequent references to the ‘Great Old Ones‘. He depicts them as a loose pantheon of ancient, powerful deities from space. They once ruled the Earth and have since fallen into a deathlike sleep. Until, of course, some deranged cult or other decides it’s a brilliant idea to summon them again. The Great Old Ones include many charming characters, from A-Z: 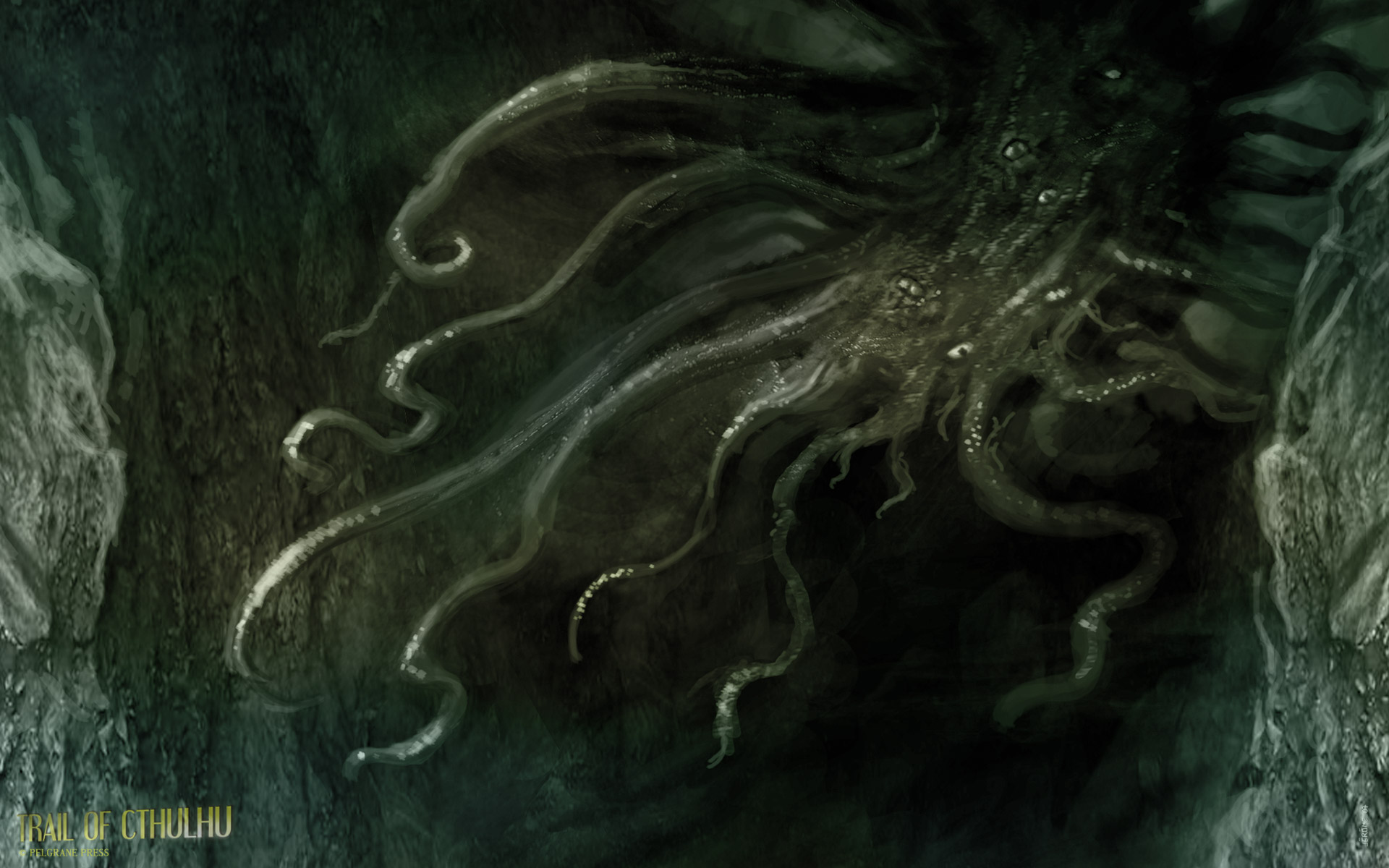 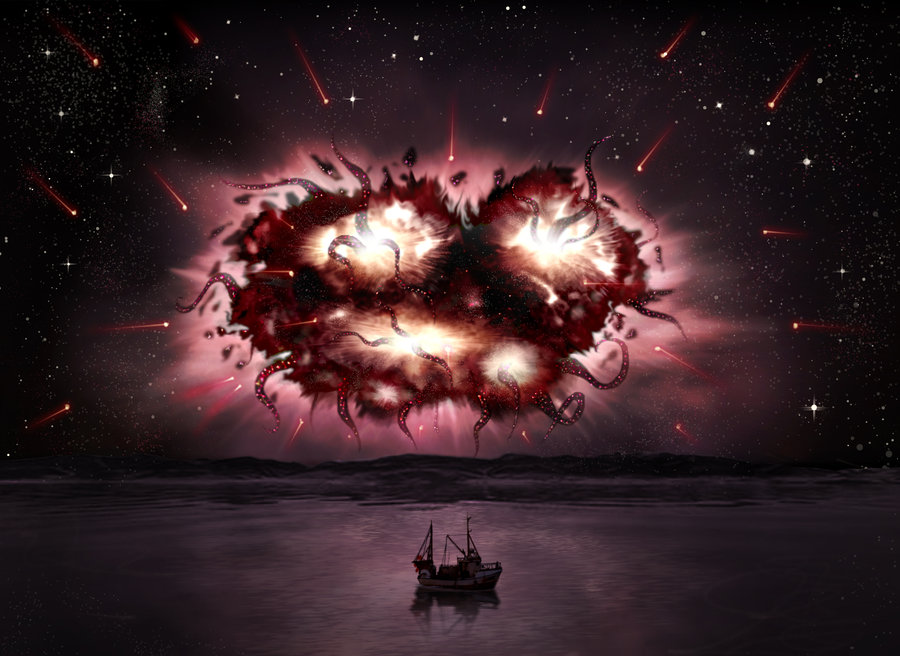 Ammutseba, once worshipped by pre-Egyptian civilisation and the daughter of Azathoth

Zathog. A blubbering mass (not mess, which is what you’d be if you’d encounter him) 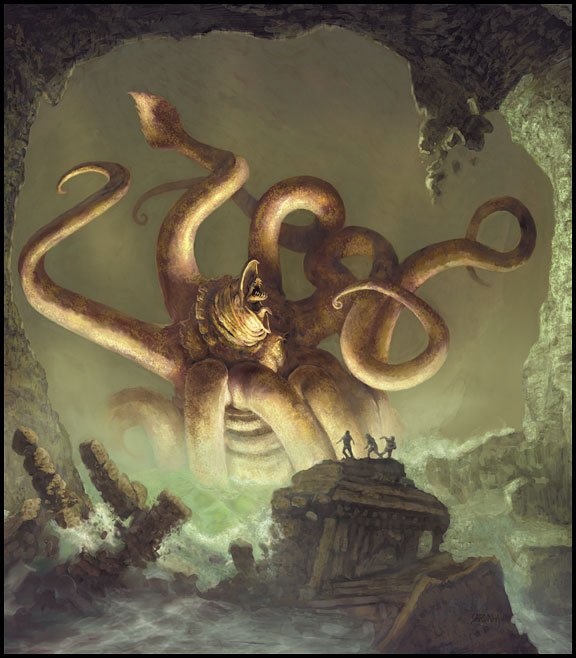 Zvilpogghua – a toad with tentacles for a face.

Say what you will of the Great Old Ones but their names and descriptions are priceless and manifold. There is an Elder Thing for any occasion, on hand to intensify any nightmare or phobia one may have, by a million squillion times… I am surprised that my Oma tried to scare me with “Hänsel und Gretel” when there was so much Shoggoth lore to infest my naïve mind with!

And then we have the Outer Gods.

These Outer Gods are ruled by Azathoth.  He is also the brilliantly-named Blind Idiot God – which sounds like what certain world leaders should be called! Azathoth holds court in the centre of the Universe whilst a group of Outer Gods dance rhythmically around him, in cadence to the piping of a demonic flute. Azathoth is basically a primordial being at the nucleus of chaos (the universe, and everything) and the direct ancestor of all other deities, including our Dread Lord Cthulhu. No idea who mom is but seeing that Cthulhu’s son was born of bile and tears, we can only imagine where our eponymous tentacled hero arose from… 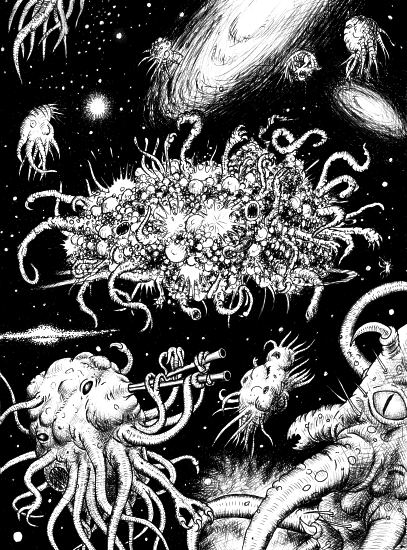 Azathoth – or ‘dad’ to our Dread Lord Cthulhu

Another god of great interest is Nyarlathotep, aka the ‘Crawling Chaos’. He is the avatar* and soul of the Outer Gods.  He serves as an intermediary between the deities of the pantheon and their cults. The only Outer God to have a true personality, Nyarlathotep possesses a malign intellect. He also reveals a mocking contempt for his masters. The cool thing about him is that Lovecraft described him from one of his (waking?) nighmares thusly:

“I had never heard the name NYARLATHOTEP before, but seemed to understand the allusion. Nyarlathotep was a kind of itinerant showman or lecturer who held forth in public halls and aroused widespread fear and discussion with his exhibitions. These exhibitions consisted of two parts — first, a horrible — possibly prophetic — cinema reel; and later some extraordinary experiments with scientific and electrical apparatus.”

If any of that sounds familiar, some speculate that Nyarlathotep refers to none other than the brilliant, enigmatic and genius-beyond-human-kind Nikola Tesla! 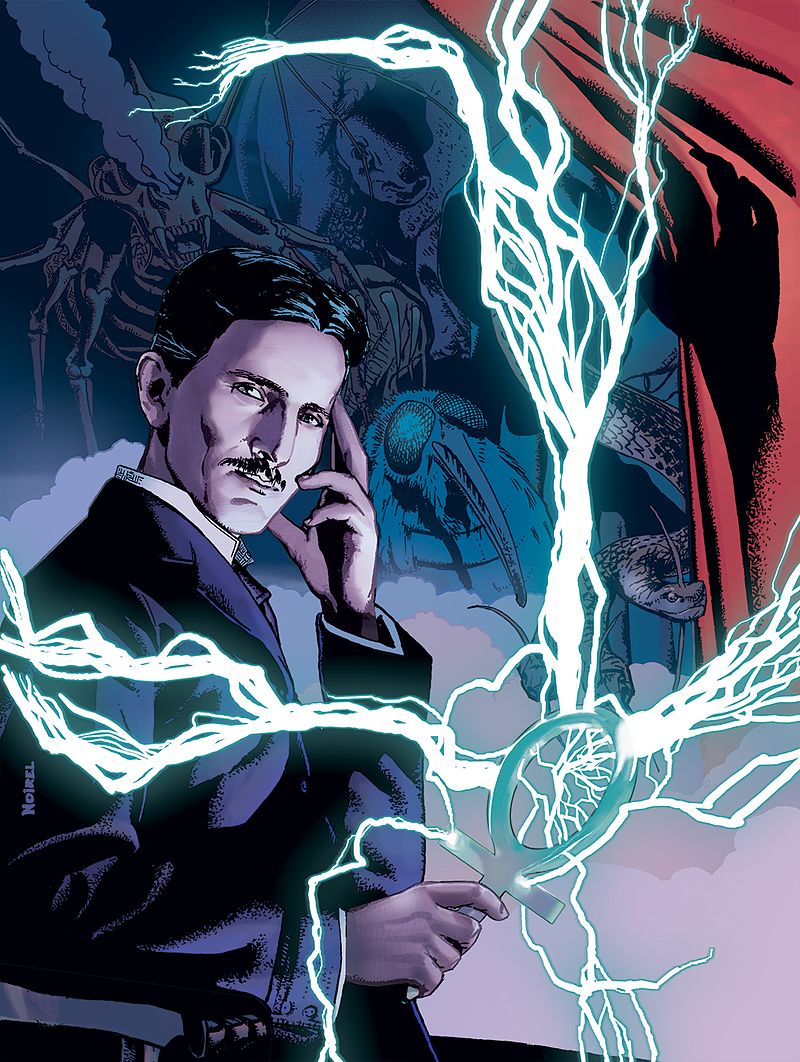 But what about Dread Lord Cthulhu, you ask?

It is hard to know exactly where our Dread Lord came from. Trust me, you will receive a rather tetchy (i.e. soul-eating) response should you dare ask. Wikipedia, the knower of all knowledge describes the creation myth as such:

“Cthulhu, in the mythos, was probably born on the planet Vhrool in the 23rd nebula from Nug and Yeb. At some later point he travelled to the green binary star system of Xoth. There he mated with Idh-yaa, and was later worshipped by the shape-shifting starspawn. Idh-yaa later spawned four children: Gthanothoa, Ythogtha, Zoth-ommog and Cthylla. Cthulhu and his family (including his starspawn), travelled to Earth. There, Cthulhu mated with his sister Kassogtha, who spawned Nctosa and Nocathulu. Cthulhu and his spawn then built the great green stone city of R’lyeh on the great sunken continent of Mu, before it was destroyed by Ythogtha. Around this time a great war started between the shoggoths, elder things, Great race of Yith, flying polyps, Mi-go and Cthulhu and his children and starspawn. At the end of the war, they all decided to share the Earth.”

I hope you are all clear on the heritage of our Dread Lord Cthulhu now. You shall be tested by repeating all the names and family tree if you ask any more questions!