Kraken invasion on a Welsh beach! The end is nigh.

You may have come across the sensationalist headlines (Fox News anyone?), so fitting with Halloween, that some sleepy Welsh beaches have suffered from an octopus invasion? Although, watching the videos of people poking the poor guys, you gotta wonder who actually suffered the most!?

I mean, even Cosmopolitan was talking about it amidst quizzes on your favourite sex position and which lipstick colour was in this season… So was J.K. Rowling. 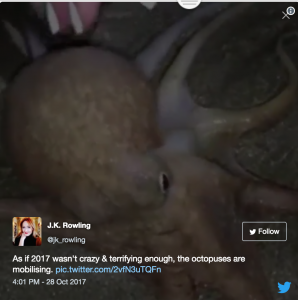 But why did they actually invade the beach?

Despite all the hype of the End of Days being nigh, there are several scientific, and much less favourable (at least to the poor ockies!) explanations. They:

Or, the most likely explanation is actually that human interference with the ocean and our climate have benefitted cephalopods so much that they are actually taking over. Mwahahaha.

And if that didn’t terrify you enough, just watch how calmly this octopus drowns this seagull.

1 comment for “Kraken invasion on a Welsh beach! The end is nigh.”