This is the tale of the Kraken and the Vikings

We talked about Kraken mythology in the ancient times already [“Kraken Mythology I” blog]. We heard about Kraken myths and lore from the Babylonians and Sumerians, the Greeks and the Jews. And, of course, the rather silly and superstitious folks of the Middle Ages.

Naturally, they are the most kick-ass of all civilisations, the Vikings (or Norsemen, more generally). We know for a fact that the Vikings are where the Kraken myth and name comes from. In 1000 AD, a bishop spotted an island, rowed to it and celebrated mass on it. When he left he was stunned when it suddenly disappeared! King Sverre of Norway named this disappearing-island phenomenon “the Kraken” in 1180 AD. Olaus Magnus described the ‘Soe Orm’ (sea worm) in 1555 in his Historia de gentibus septentrionalibus (History of the people of Northern regions). 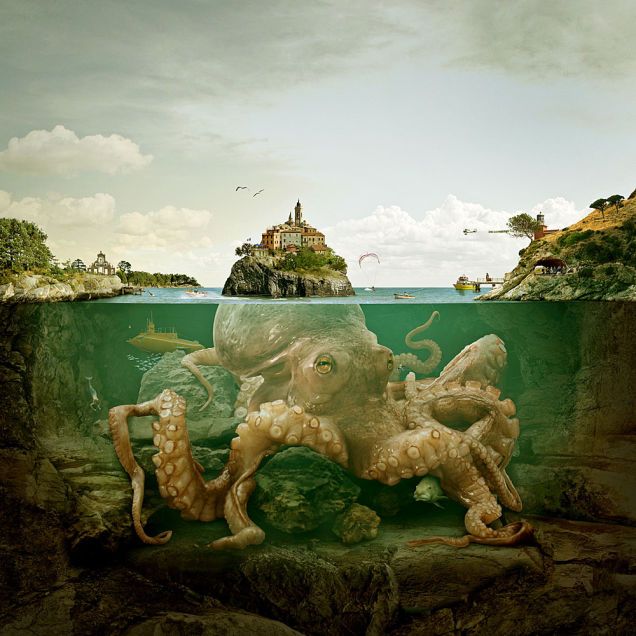 The Hafgufa is believed to be a reference to the Kraken – the greatest monster occurring in the water. It is its nature that it swallows both men and ships and whales and everything that it can reach. It is submerged both by day and night together. And when it strikes up its head and nose above the surface, then it stays at least until the turn of the tide.

Carl Linnaeus, who some say is wrongly accredited as the “father of taxonomy”, was a firm believer in sea monsters. He used the term Kraken as label for all marine oddities (this is a good time to check out these instances where scientists used taxonomy as an insult. Heh. Scientists). Linnaeus talks about the Kraken at length and how they rise to surface looking like small islands. When these islands go down they create the maelstrom* that can suck whole fishing fleets to the bottom of the abyss. The Kraken eats its fill and then has a mighty “Release the Kraken!” moment. 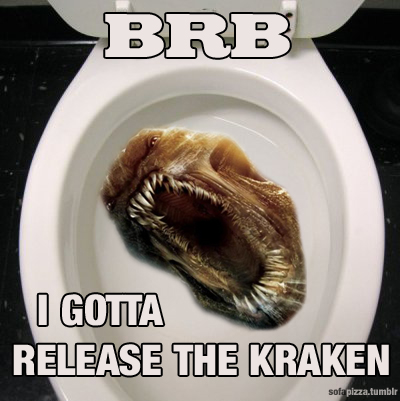 Uhm, yes. We’re talking Kraken poop now: Its excrements are so thick and full of scents they draw in fish from all over the place:

A “great many old fishermen,” Pontoppidan claims, say that its “evacuation” colours the surface of the water, which “appears quite thick and turbid.” He explains in rather colourful detail: “This muddiness is said to be so very agreeable to the smell or taste of other Fishes, or to both, that they gather together from all parts to it, and keep for that purpose directly over the Kraken: He then opens his arms, or horns, seizes and swallows his welcome guests, and converts them, after the due time, by digestion, into a bait for other Fish of the same kind.”

Then of course, the Viking fishing fleets follow the fish and thus, the cycle of life continues… So, there clearly was some highly unfair maligning of nature’s finest creatures. The Kraken was simply misunderstood! It wasn’t that the Kraken malignantly chased and then ate the fishing boats (I have it on good authority that it would have been wayyyy too lazy to do so). Instead, those helmet-headed Vikings were rather mindlessly chasing the fish without looking where they were going! The fish, even more mindless creatures, simply couldn’t help themselves getting drawn to the Kraken’s multitudinous fragrant excretions. And so, one maelstrom later, it all ended up in the Kraken’s belly, causing more indigestion and mighty “Release the Kraken!” moments. Kraken exonerated. 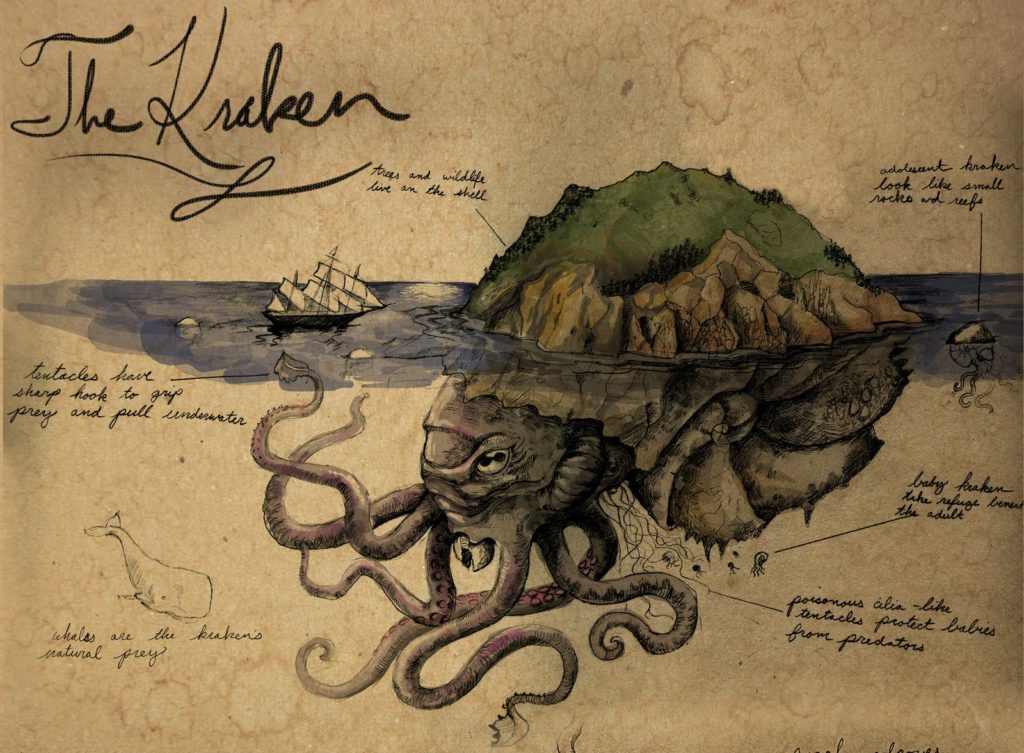 Another Kraken island (by Ratzlaff on Wasted Talents) 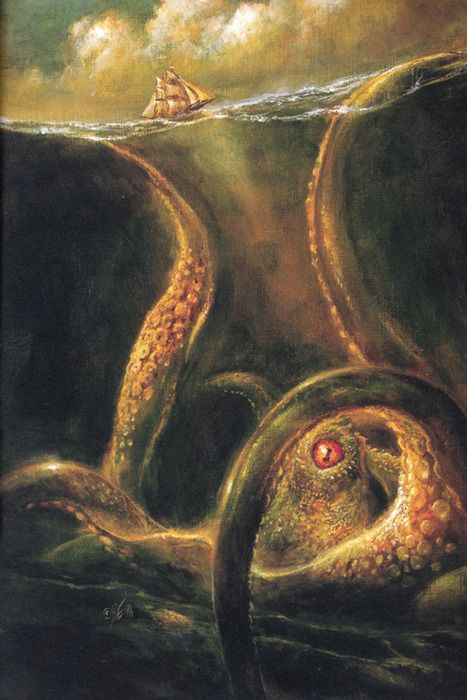 But then, of course, the religious overlords had to wade in…

As was their wont, the European Christians had to get up everyone’s grill – yes, even the Vikings‘ – and had to go name everything ‘officially’. The Bishop of Greenland described our favourite sea monster in 1734, followed by the Bishop of Bergen in 1755’s Natural History of Norway. Now the pious intelligentsia had legitimised it and ‘officially’ named it as the Kraken. Great job! Seeing the pagan King Sverre already did that 600 years earlier…

But of course they screwed it up by also calling it the Krabben (misnomer) or Kraxen – meaning an uprooted tree, or simply to depict any old sea monster. The most problematic part of the Bishop’s description were the nostrils and whiskers. And the fact that they described heads of sea serpents to resemble a horse. I am pretty certain that the feet of these pious men never actually got wet when they were describing the Kraken. Or that they would have had their own “Release the Kraken!” (bowel) moment, if they had. 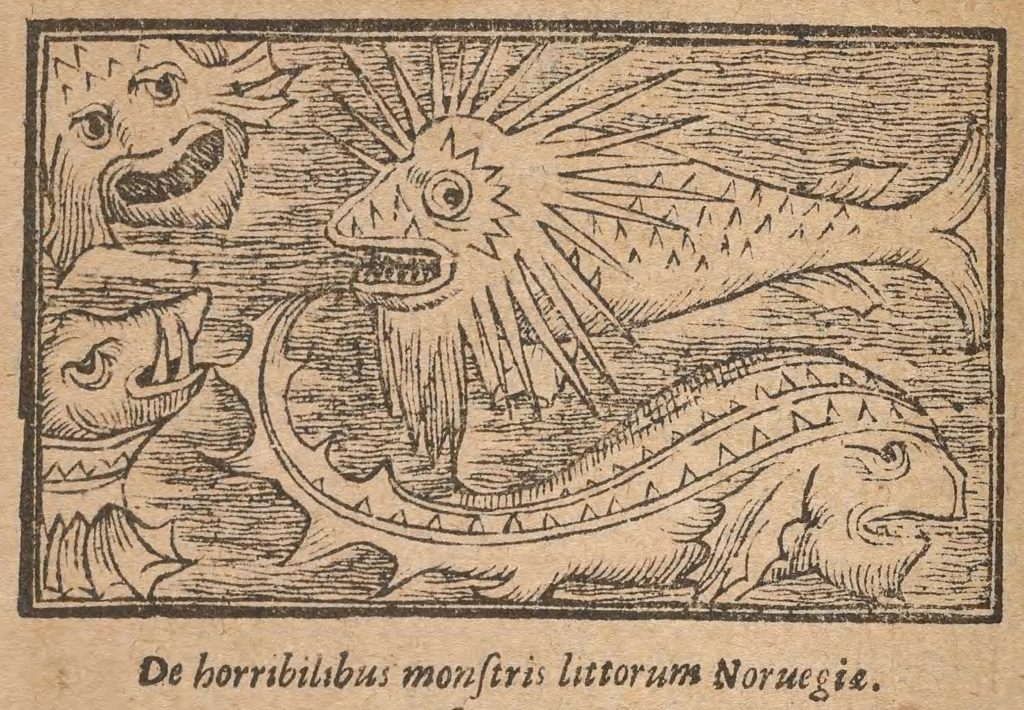 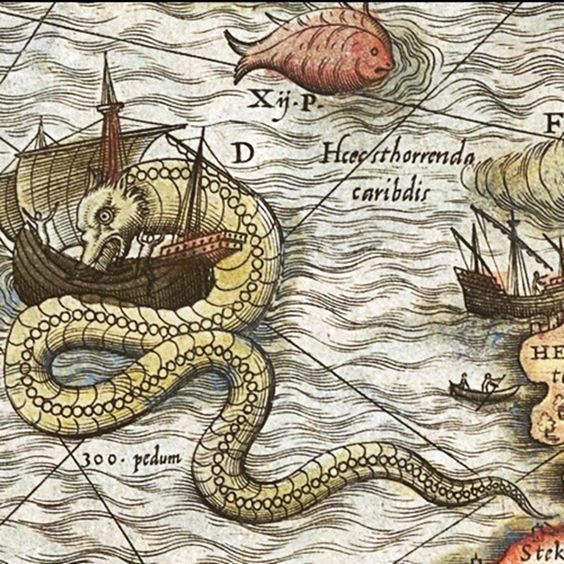 Were the Viking Kraken real?

Norway is one of the few countries (New Zealand and Newfoundland being others) that has had regular Kraken sightings and also had several giant squid wash up on its shores. Or, apparently, attack ships. But, as these immense deep-sea creatures are not likely to surface unless they are dying or dead, it’s speculated that ancient sailors confused something else in the water for the Kraken: Bubbles, dangerous currents, and the appearance of new land are all signs of underwater volcanic activity, something common in Iceland. Most likely, the truth lies somewhere in the maelstrom.

And then, there are many other Kraken, far and wide…

…including the one responsible for discovering my home country, New Zealand. But that story has to wait for the next [“Kraken mythology III – the Pacific Kraken”] blog.

The best book is probably Richard Ellis’ ‘The Search for the Giant Squid’ [we’ll also do a review of “the ultimate Kraken books”] and this paper by Salvador and Tomatoni (2014).

1 comment for “Kraken Mythology II – All hail the Vikings!”