This is a tale of Kraken Horrors on Halloween

Crikey! It’s been a while since we had a Kraken News Update… Our lair mate DrPusSea has spent the last few months finishing up her 7-year global research project on “Behaviour Change in Demand-Side Management“. She finally got it signed off, but not after flying around the world being busy talking about human behaviour (how VERY boring, when there is Kraken behaviour to discuss!). However, we forgave her when she ended up at her cousin’s traditional Austrian wedding wearing a custom-made Kraken Dirndl and mermaid hair! She also did an excellent Kraken Zombie impression in front of the White House (which is after all the lair of all evil!) and found some great Kraken art at the Burning Man decompression in LA, including an ice throne for the Kraken Queen. YASSS! And she brought us home Kraken loot. Glad to have you back with us, DrPusSea. 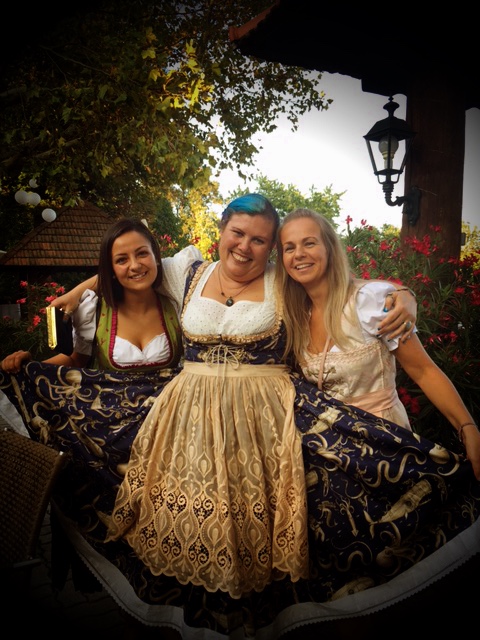 Only a Krakenologist can rock a Kraken Dirndl at a traditional Austrian wedding! 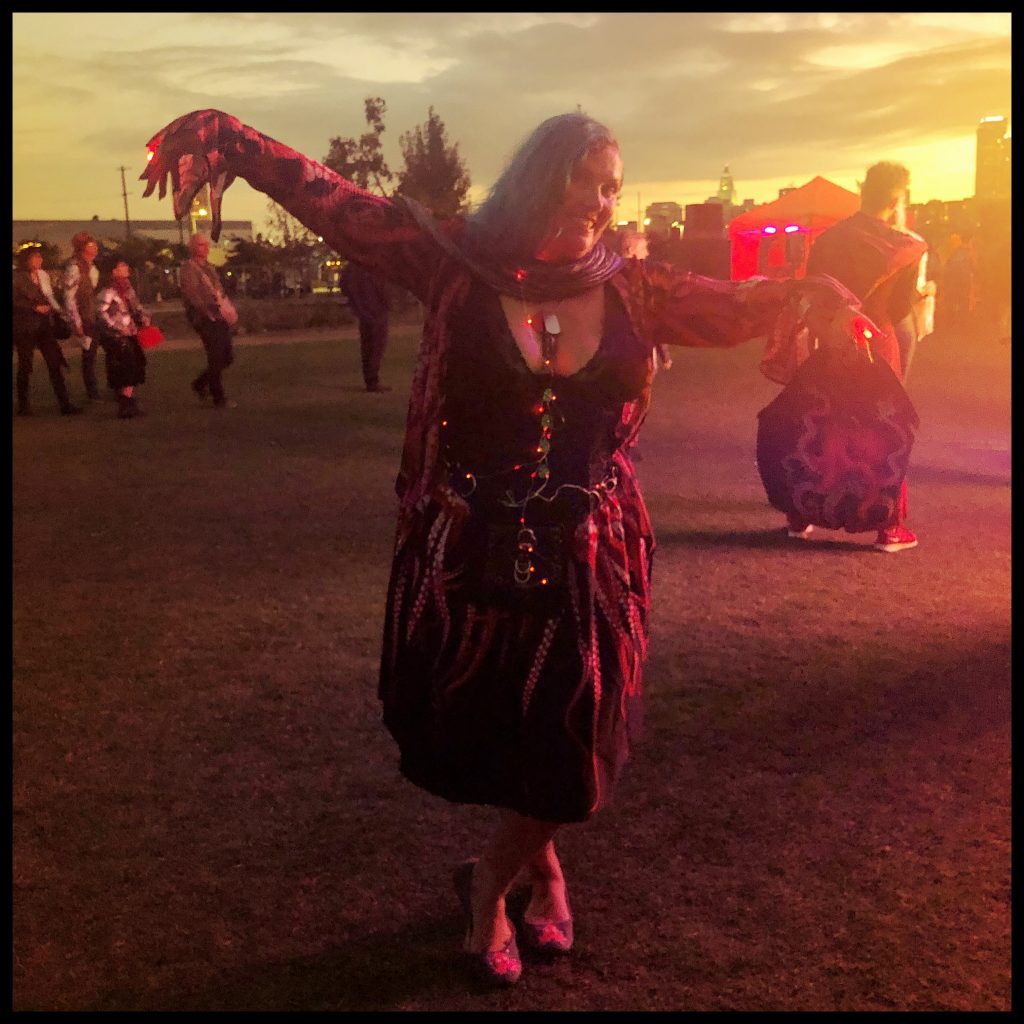 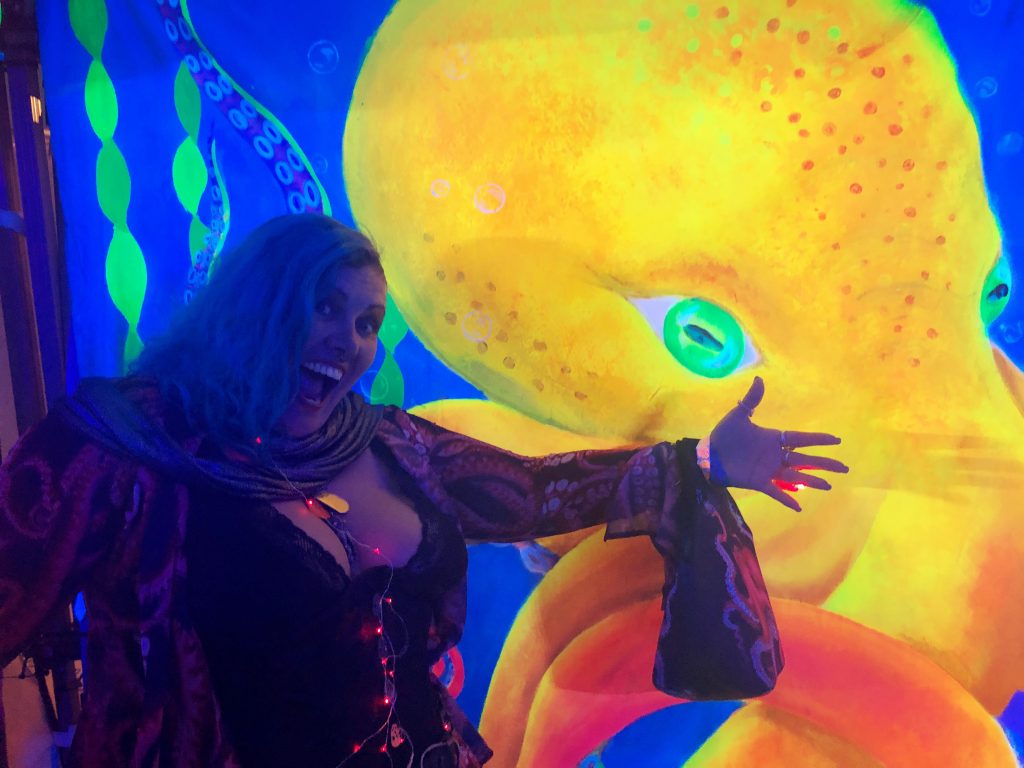 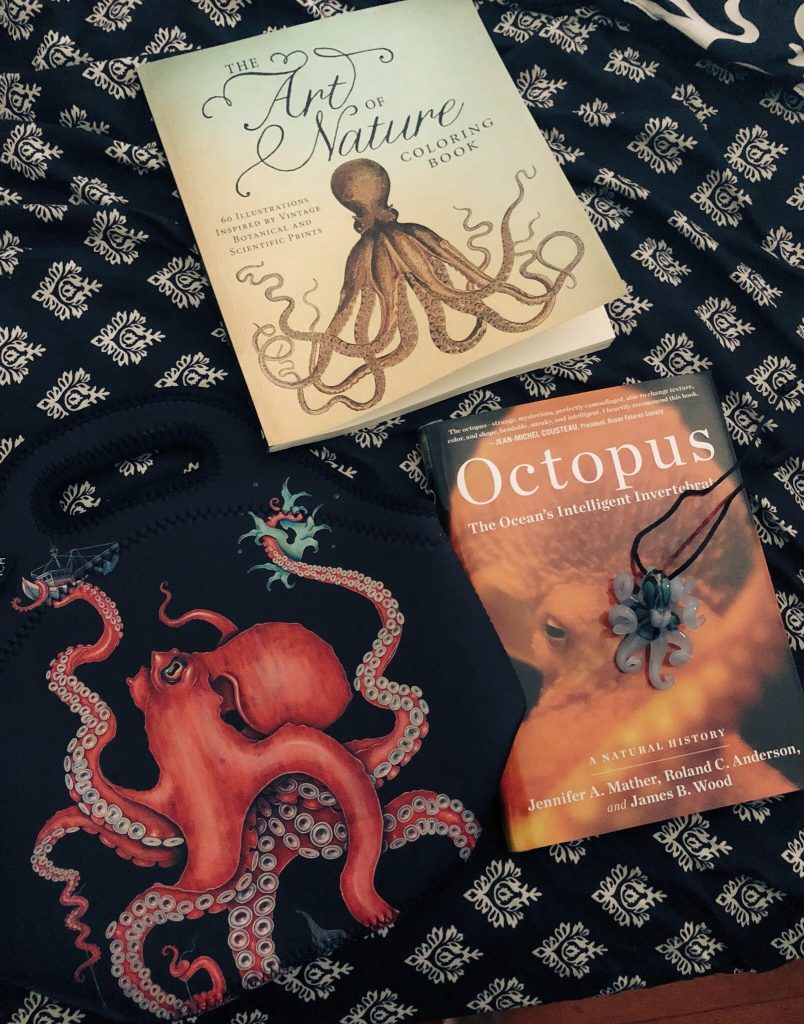 Kraken loot for us!

Soooo, what else has happened in Kraken News in the world?

We all heard of the c*ck-blocking cuttlefish who cross-dress as females to sneak in front of a larger male to inseminate its intended? There is a great video from a show called “Natural Born Hustlers” that shows this sexual sneakery in action:

However, that’s not all there is to know about sneaky squid sex. A recent study has discovered that male arrow squids go to gross lengths to stop a female from being inseminated by another male:

Certain males have evolved a strategy to get ahead of the competition: they lodge a tube-like plug into the female’s reproductive tract, blocking her ability to use stored sperm.

Again, it’s the little males (the smaller, blue-hued “sneaker males”) that take the joy of nookie out of their bigger compadres, the brawny, serial monogamist green males. Unfortunately for the female squid, the obstructive sperm capsules can do lasting damage to their ability to reproduce. In some cases,  the plugs were so well attached that the female could never dislodge them—effectively quashing her ability to use her seminal receptacle and putting a permanent damper on any future sneakiness. Naughty.

As if these tales of sneaky Kraken sex weren’t enough to get the Krakenologists all hot and bothered, they recently found an unbelievable deep-sea nursery of over 1000 (!) octopus females. These rarely-seen octopuses (Muusoctopus robustus) look like they turned themselves inside-out. This is their brooding posture, protecting their eggs, which may also benefit from seeming warm water seeping through fumaroles on the ocean floor.

Hopefully, these Octomoms in California are doing better than the recently-discovered largest deep-sea octopus nursery in Costa Rica: none of these embryos seemed to be developing and all the moms looked to be in severe stress. This could be cause it was too hot, cause they don’t actually like hanging out in large numbers or cause there are CANNIBALS amongst them! Talking about dark brooding secrets, octopuses were also found to do other terrible things, both to themselves and their doomed mates:

After reproducing, female octopuses begin a dramatic death spiral, starving themselves and eventually wasting away, dying by the time her eggs hatch. And, they typically kill and eat their mates.

In captivity, some even go to great lengths to speed up the process, tearing off their own skin or eating tips of their tentacles.

To help you get over some of this gruesomeness, look at this adorable footage of scientists going gaga over the most beloved deep-sea creature: DUMBO (aka Grimpoteuthis sp.), maybe the most aptly-named creature ever! These cuties inhabit the deepest, darkest parts of the Atlantic and Pacific Oceans, which makes studying them somewhat difficult. This dumbo was found two miles below the surface; others have been found at twice that depth. Although most species of dumbo measure between 8 and 12 inches long, some can reach upwards of 6 feet in length – truly, an abyssal creature from the Hadal Planes.

But never forget, despite how cute they are: They’re all vicious killers!

Remember seeing that adorable pea-sized octopus that researchers rescued from a pile of floating plastic trash in Hawaii? 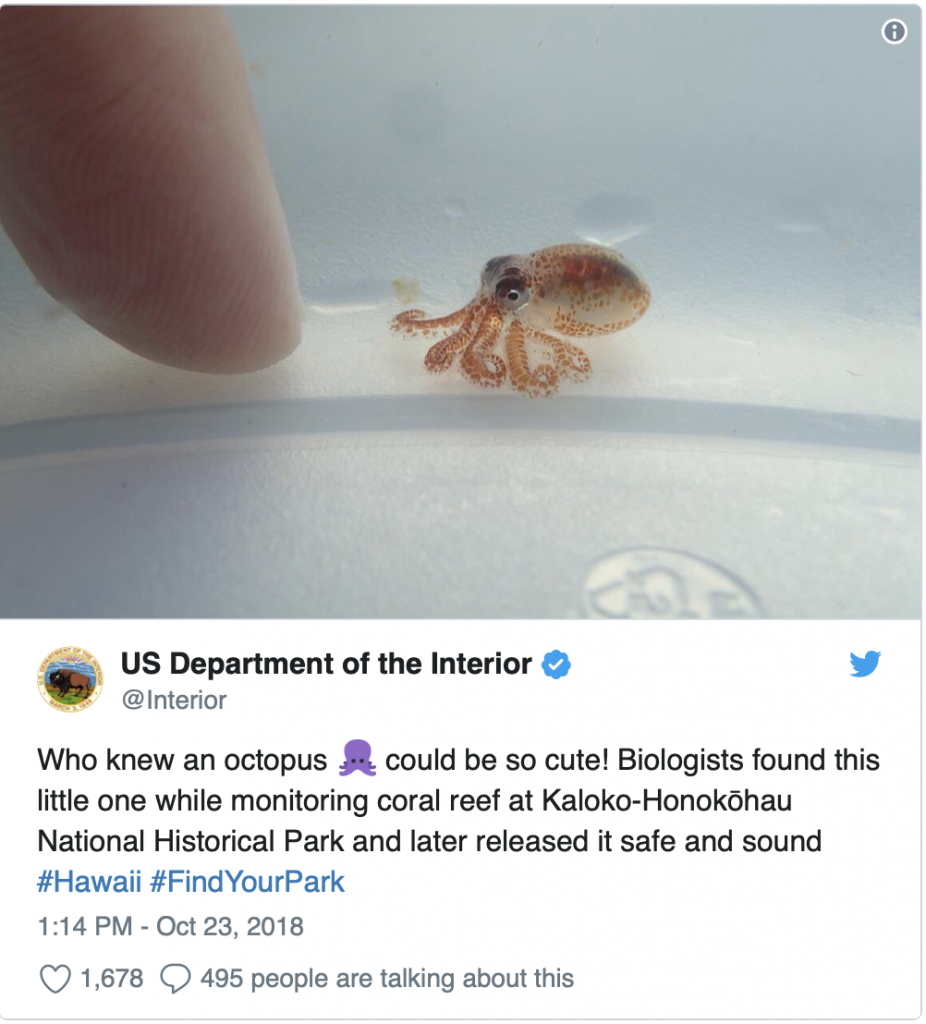 Well, before they could even finish going “Awwwwwww”, the little monsters showed their true nature and cold-heartedly murdered a baby crab.

We can’t blame the baby for being hungry and choosing to snack on a convenient crab. It’s just that it looks like a scene from a sci-fi horror movie. 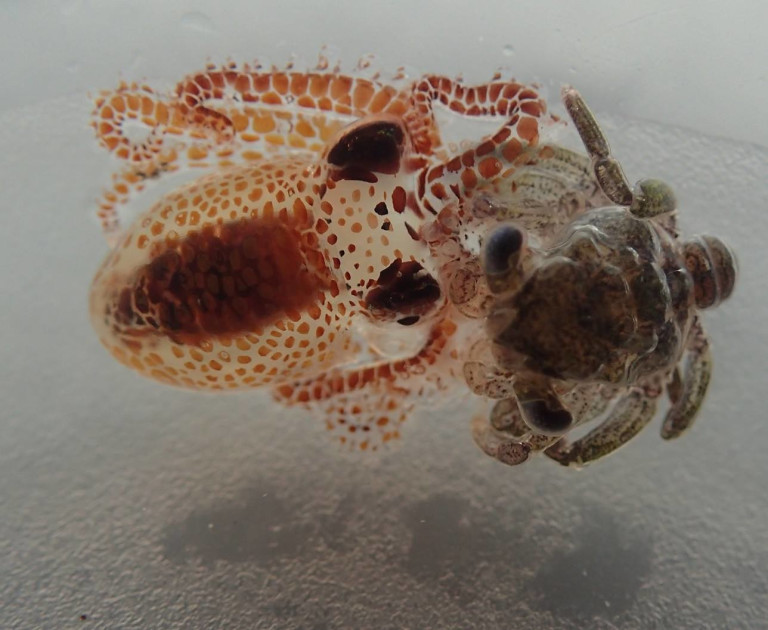 Eat more squid! Don’t eat squid! Are you sure you aren’t eating squid?

In terms of confusing culinary news, these tales of Kraken takeover (yay!), disappearance (woe!) and switch-outs (wtf?) take the cake. First, we are told that we should probably move to eating more cephalopods seeing they seem to be one of the only things better off with the pending climate change catastrophe. Then, there are tales of old Japanese squid fisherman crying, because the animal that is “their soul” is fast disappearing:

Out of more than a dozen types of squid eaten here, the Japanese flying squid, or Todarodes pacificus, is so central to the national cuisine, it’s sometimes referred to as maika, or the true squid.

But now, fluctuations in ocean temperatures and years of overfishing and lax regulatory oversight have drastically depleted populations of the translucent squid in waters around Japan.

That such a ubiquitous creature could disappear has shaken a country whose identity is intertwined with fish and fishing, a nation where sushi chefs are treated like rock stars and fishermen are the heroes of countless TV shows. The shortage of flying squid, an icon of the working and middle classes, has dealt a hard blow to the livelihoods of not only fishermen, but everyone from suppliers to traders at Tokyo’s famous fish market. Here in Hakodate, the squid shortage threatens the very culture and shared history of the town.

As if that wasn’t bad enough, some bastards were selling squids as octopuses! Fortunately, they got charged and shut down before anyone could note how dumb so-called connoisseurs are, for not realising the difference… And finally, we are being told to eat grimy Pollock instead of tasty calamari. Blergh.

Big, scary Kraken released all over!

An aquarist’s dreams (or nightmares)

A while ago, a giant Pacific Octopus (or “GPO” for the budding Krakenologists in-the-know) called “Joan” found residence for about a year in Central Coast Aquarium after being accidentally caught by a fisherman. You could watch Joan do her thing on the live cam, which was quite exciting at times. However, after a year of her hijinks the aquarium decided it was time to let her go again, although not before having to fight Joan for 20 minutes to release their GoPro! Go Joan, have a great life!

Kraken wrestling is a sport no more

For years, sweet GPOs like Joan were hounded by madmen engaging in a cruel sport, called “Kraken wrestling”. Even though DrPusSea bought into Jacques Cousteau’s glorifying tale of the “female James Bond” Joanne Duffy, one of the few female Kraken wrestlers in Puget Sound, we are glad that this horrifying harassment of giant octopuses minding their own business is finally declared officially extinct. 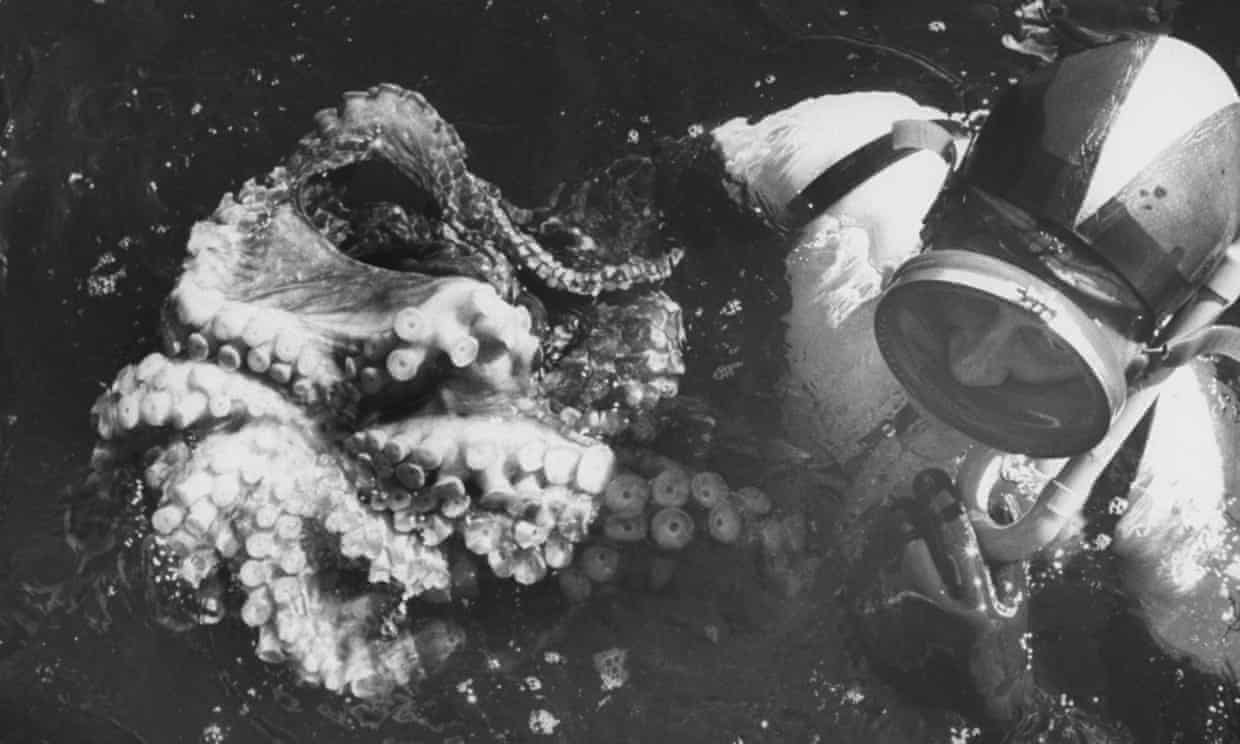 Also spotted: tentacles taking over in time for Halloween

First, DrPusSea got this great shot of a very gloomy-looking downtown Los Angeles being illuminated by LED Kraken. 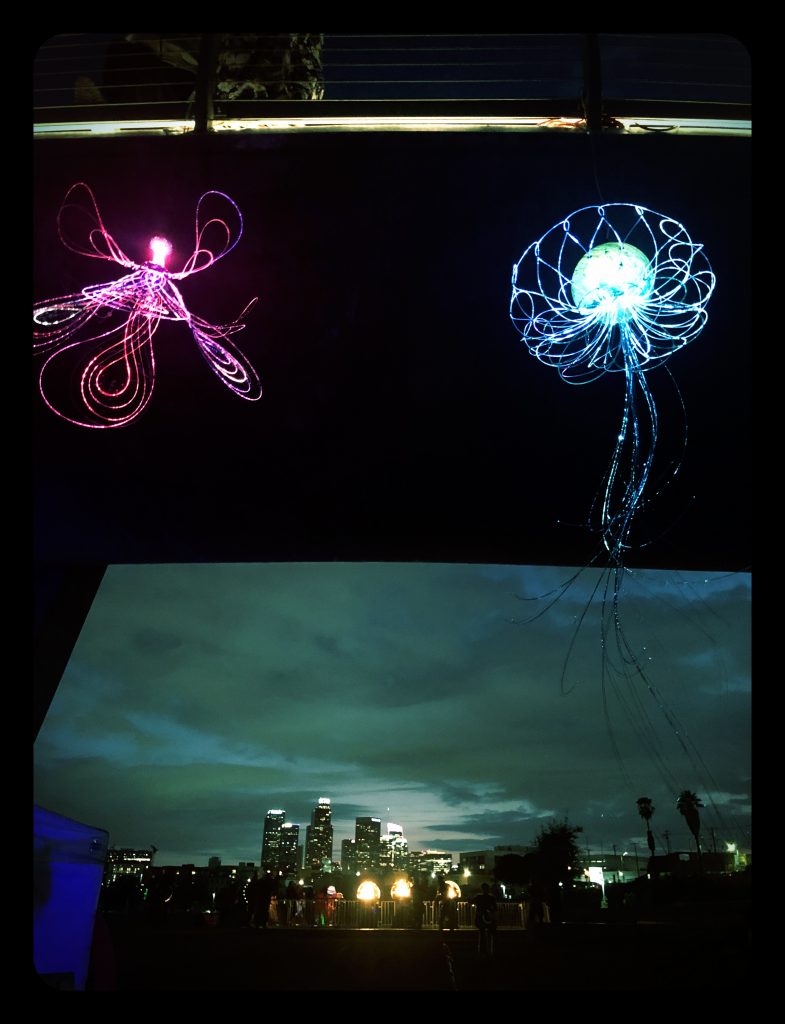 Then, there were these newly discovered tentacles taking over Cornish beauty spots.

Or this one in Australia.

Or this one taking over a whole warehouse in Philly. 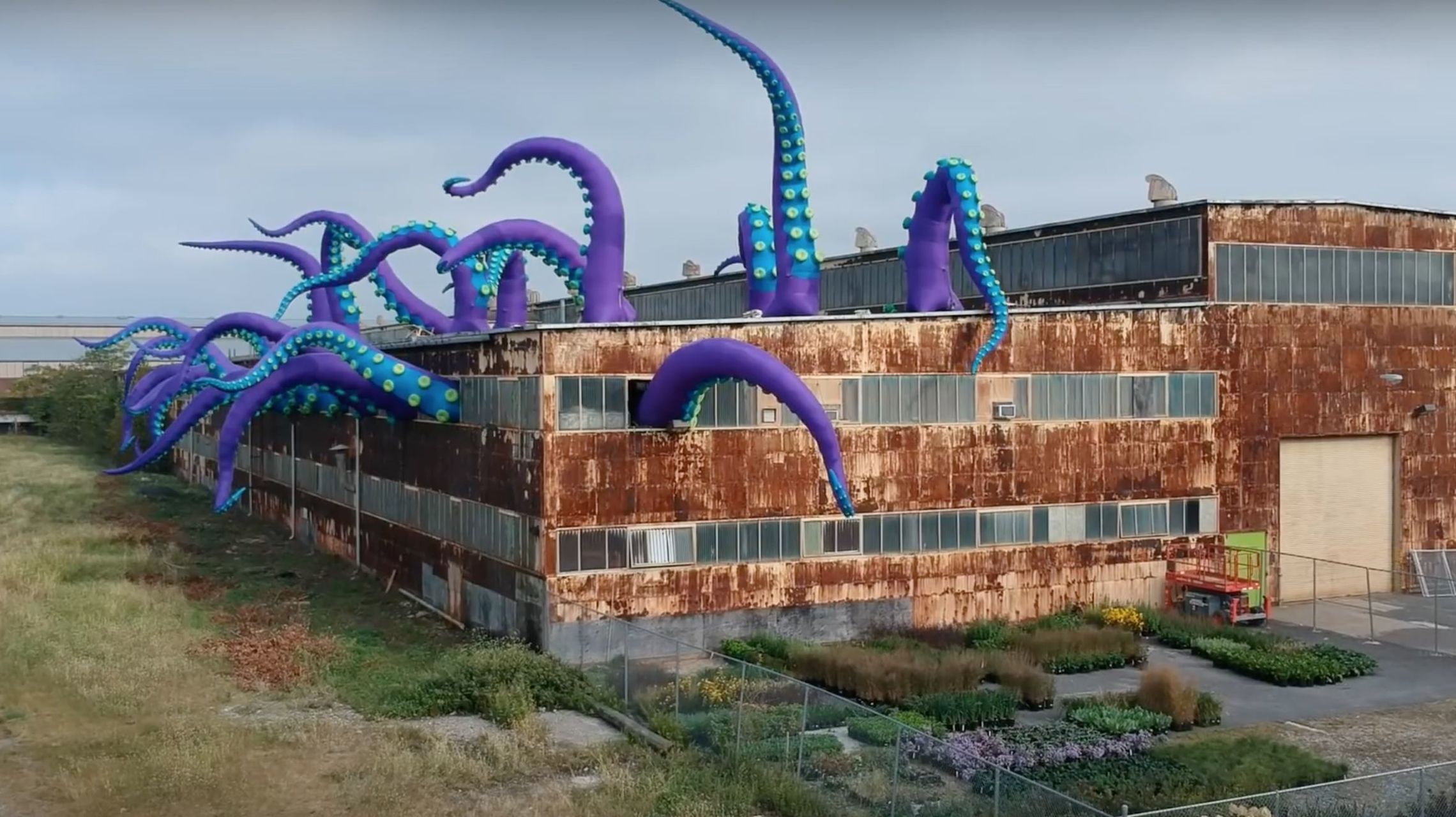 Even though this silly dog looks somewhat perturbed by the Kraken being released on land, the greater intellect of human kind shows clearly the only correct reaction to have: RUN FOR YOUR LIFE!!! 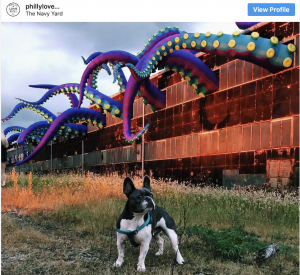 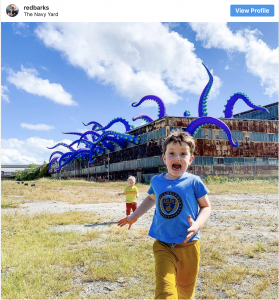 Talking of greater human intellects, they clearly still are nowhere near as smart as the Kraken: this artist is planning on evolving into a cephalopod – though we all know humans will never manage to be as alien as our tentacular friends. This aquarium let their octopus choose the numbers for the mega-million Jackpot (we think that didn’t work out so well – there only ever was one psychic octopus). And these crazy scientists decided it was a good idea to douse an octopus in MDMA (aka Ecstasy). Even though the usually-reclusive beasts became somewhat more social on the party drug, this quote actually sums this “research” up best:

The octopus memory system is not a very good model for studying human memory because it is just too complicated.

And we couldn’t finish off Halloween week any better than by proving that it’s not just the Kraken who’ll outsmart human intruders (and in the end, its tormenter also, by escaping with the humans). This pissed-off New Zealand fur seal finally had enough of the idiot kayakers stopping it from enjoying its tasty octopus, and spectacularly slapped one in the face with it! Happy Halloween!